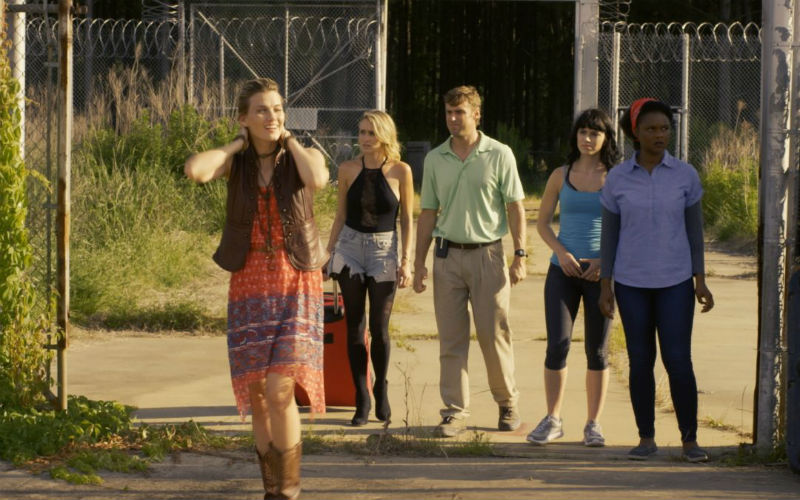 The one-night screening of “Devil’s Acid” will be 7:30 p.m. Jan. 16 at Robinson Film Center, 617 Texas St. in downtown Shreveport. Tickets may be purchased at www.robinsonfilmcenter.org.

“Devil’s Acid” was created in a cult classic B-movie style. The horror-meets-comedy takes audiences on an adventure of hilarious plot twists and nail-biting adventures.

The film is not yet rated, but recommended for mature audiences only. The runtime is approximately 88 minutes.

Attendees who pre-order an iTunes download of “Devil’s Acid” will receive a free beer courtesy of the filmmakers and a “Devil’s Acid” mini poster. Purchased copies of the “Devil’s Acid” DVDs will be signed by the director and cast members at the Robinson Film Center screening.

Find us on social media: www.facebook.com/DevilsAcid/

Garrett Kruithof is a director, actor and acting coach in northwest Louisiana. A graduate of Northwood High School, Garrett Kruithof was born in Shreveport and raised in Mooringsport, Louisiana. Kruithof played opposite Emmy Award winning actress Alfre Woodard (“Luke Cage,” “Desperate Housewives”) in “Memphis Beat.” He’s had recurring roles in “Magic City” and “True Detectives.” And the actor took on the role of Karl Kleppinger Jr. in the 2016 feature film, “Deepwater Horizon.”

Kruithof is the owner and instructor of Northwood Acting Studio, operating out of Millennium Studios in Shreveport. www.northwoodactingstudio.com

Gorilla Tree Film Co is a northwest Louisiana based turnkey film studio. The company specializes in producing and distributing feature films, with an emphasis on selling to niche markets while also providing rental and production services. Gorilla Tree Film Co is a portfolio company of the Entrepreneurial Accelerator Program (EAP). www.gorillatreefilms.com

The Entrepreneurial Accelerator Program (EAP) helps create wealth for entrepreneurs by analyzing viable ideas and products, matching them with informed investors, and nurturing them toward rewarding markets.

Local Accelerator Program Launches Entrepreneurial Podcast Featuring Practical Advice From Local Entrepreneurs and Business Owners Shreveport, LA – Launching and growing a new business comes with its share of unpredictable challenges — but it doesn’t have to be a...

While the current weather situation says differently - Spring is on the way, along with a full weekend of live music, food, art, drink, and fun in the park! Crawfest at Betty Virginia Park is BACK! EAP will be there & wants to give YOU a Surface Pro 7! Team EAP...

We use cookies on our website to give you the most relevant experience by remembering your preferences and repeat visits. By clicking “Accept All”, you consent to the use of ALL the cookies. However, you may visit "Cookie Settings" to provide a controlled consent.
Cookie SettingsAccept All
Manage consent

This website uses cookies to improve your experience while you navigate through the website. Out of these, the cookies that are categorized as necessary are stored on your browser as they are essential for the working of basic functionalities of the website. We also use third-party cookies that help us analyze and understand how you use this website. These cookies will be stored in your browser only with your consent. You also have the option to opt-out of these cookies. But opting out of some of these cookies may affect your browsing experience.
Necessary Always Enabled
Necessary cookies are absolutely essential for the website to function properly. These cookies ensure basic functionalities and security features of the website, anonymously.
Functional
Functional cookies help to perform certain functionalities like sharing the content of the website on social media platforms, collect feedbacks, and other third-party features.
Performance
Performance cookies are used to understand and analyze the key performance indexes of the website which helps in delivering a better user experience for the visitors.
Analytics
Analytical cookies are used to understand how visitors interact with the website. These cookies help provide information on metrics the number of visitors, bounce rate, traffic source, etc.
Advertisement
Advertisement cookies are used to provide visitors with relevant ads and marketing campaigns. These cookies track visitors across websites and collect information to provide customized ads.
Others
Other uncategorized cookies are those that are being analyzed and have not been classified into a category as yet.
SAVE & ACCEPT
Apply Now!